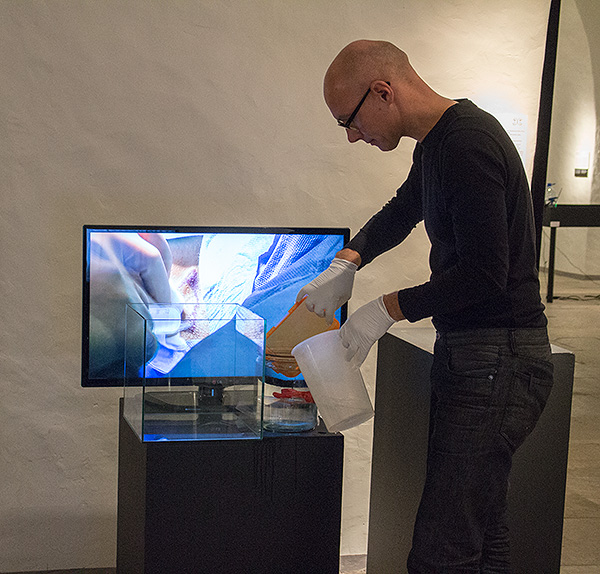 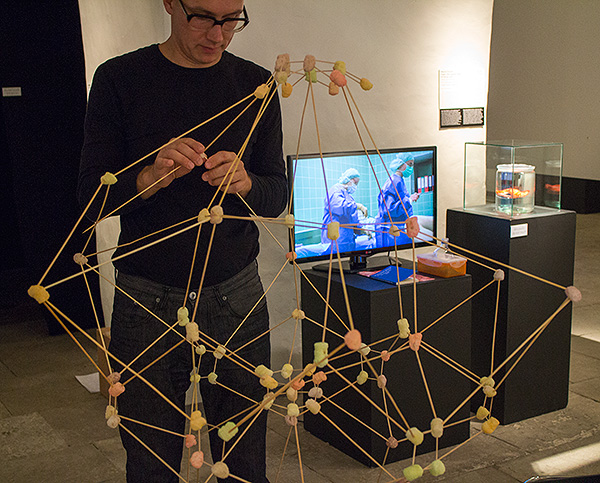 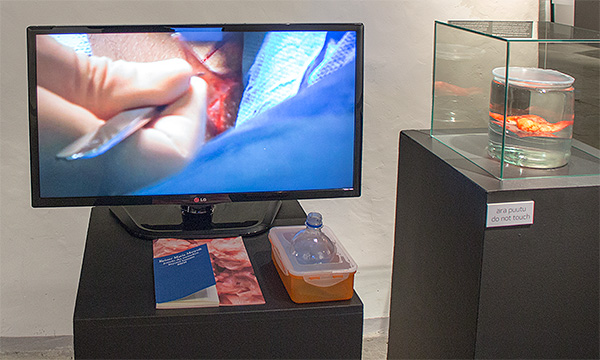 this exhibition feature highly contrasting art projects, whose authors are revered specia­lists in their fields the world-over. since hybrid art and inter­di­sci­plinary research are charac­te­rised by all manner of unexpected forms of practice, we will present highly contrasting works to viewers, where visual arts are intert­wined with biotech­nology, computer technology, network culture, robotics, sound art, social sciences and many other disciplines.
reiner maria matysik’s sculpture – made of his own cells and trans­formed into a wet specimen – at the “rhizope” exhibition provides us with an artistic research example that aims to bring inert matter to life. his sculpture is an indication of man´s changing conception of biology, of his biolo­gical role, and especially of the biolo­gical activity itself. matysik’s artwork merges designed objects with natural organisms, fusing the harmo­nious natural and the man-made. redefining life in sculpture means to under­stand living matter through its creation.
a non performing performance
thingification

reiner maria matysik will concen­trate on the archaic endeavor of art. with a sponta­neous sculpture he will control and shape a limited part of man´s environment. he will give an example of arts possi­bi­lities to bring inert matter to live. he will show how sculpture is an indication of man´s changing conception of biology, as well as an indication of his biolgical role, and especially as a form of biolo­gical activity in itself. he will try to merge designed objects with natural organisms. he will work on the harmo­nious fusion of the natural and the man-made.
he will search for it conti­nuously, may find it fragmen­tarily, to let it slip out of sight again.
redefining life in sculpture means the under­standing of living matter through its creation.
and in the end the culpture of his own cells that was trans­formed into a a wet specimen may play a crucial role in it all.