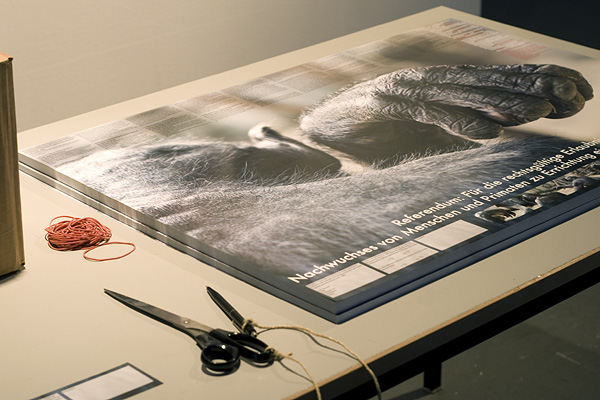 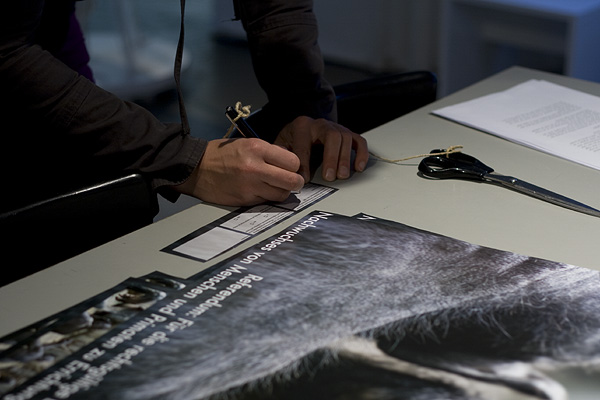 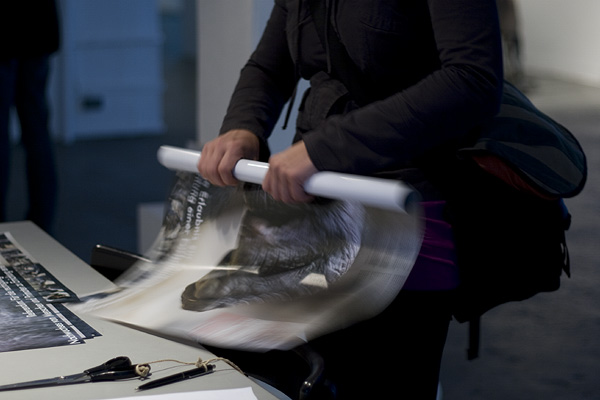 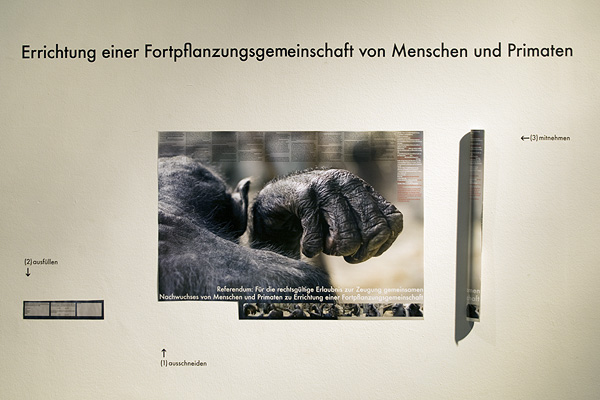 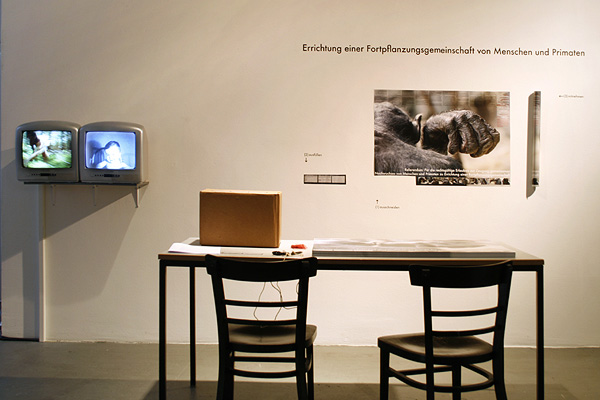 the exhibition project looks at processes of disin­te­gration and creation of animal and human identities, based on the theore­tical concepts of becoming an animal, as formu­lated by deleuze and guattari in thousand plateaus. within this framework matysik estab­lishes an infor­mation center, where his research on this topic is made available. by use of placards he calls for active parti­ci­pation in the vote to change the law protecting embryos in germany, which corre­sponds to his concept for a referendum (see 09.06).
research on and the creation of hybridity represents an important focus in reiner maria matysik’s work. the three works on display refer – at socio­lo­gical, etholo­gical and genetic levels – to various phenomena of becoming animal or becoming human and each have models in cultural history and the history of science. the video “feral child,” which shows a young woman naked in the jungle, takes as its model the half-mythical reports of feral children who were raised by animals and, following their entry into civiliz­ation, continued to display animal behaviors and in this way under­mined the romantic concept of the “noble savage.”

the second video, “junge und affe” [boy and monkey], takes as its starting point a famous study by a married american research couple whose film material matysik uses as footage and rearranges. in 1931 and 1932, the kellogg’s raised the baby chimpanzee, gua, together with their own son, donald, in order to see what develo­p­mental diffe­rences exist between monkeys and humans when they experience the identical upbringing. the chimpanzee is ideally suited for a funda­mental inter­ro­gation of the border between human and non-human animals, as it’s genotype is appro­xi­mately 95 percent the same as human. this genetic proximity may – along with ilya ivanov’s notorious attempts at cross­breeding humans and apes in the early 1920s – have provided the inspi­ration for the third part of matysik’s work: a plea in the form of posters and questi­onn­aires through which the artist seeks people who, in the service of science, are willing to offer their services as a parent for a monkey-human hybrid.

as a “mad” scientist who has already created a furor with organic plastic and the creation of “future lifeforms,” in a new version of his much-liked “hoax,” matysik plays here with the vague fears people have of a science which answers only to itself as well as with the naïve expec­ta­tions of healing which are connected with progress in the life sciences. rumors still circulate today that such experi­ments take place success­fully behind closed doors. and yet despite the fact that an entire zoo of trans­ge­netic animals has long existed in various research facilities, such attempts at cross­breeding are, in general, officially condemned as unethical.

the two examples of humans becoming animal as well as animals becoming human, which matysik has selected and newly-inter­preted for his films, both inves­tigate the role of heredity and socia­liz­ation in identity formation or for an individual becoming human or becoming animal. above all, however, the poster with its pseudo-scien­tific appeal upsets the human self-image and raises questions as disturbing as they are current.