Failed Organisms opened at the Labora­toria Art & Science Space in Moscow. In addition to my works on failed organisms I presented my project Referendum: For legal permission to procreate offspring of humans and primates with a view to estab­li­shing a repro­ductive collective. A few days later I gave a public lecture at the exhibition, and after­wards, a man who was about 60 years old came to see me. The public relations director of Labora­toria, Olga Sofronchik, trans­lated our conver­sation. At the very beginning the man handed me a folder in A4 format and said it came from his grand­f­ather, who was a doctor of German origin. When he got older, he said, his grand­f­ather had had strange ideas about autonomous, mound-shaped human body parts and had tried to explain them to his grandson. He had written down these visions and given them to his grandson shortly before he died with the request that they be published. However, as his grandfather’s drawings were not very detailed and the notes difficult to read as well as being in German, he had so far not found anyone who knew what to do with the material. He said he had come to the opening of my exhibition at the Labora­toria Art & Science Space in the hope that I was someone who could take it over. After listening to my lecture and the discussion after­wards, he said that he was sure I would be interested in the legacy that had been entrusted to him, and he appealed to me to take the folder and release him from the burden. 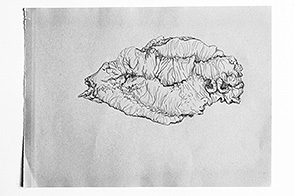 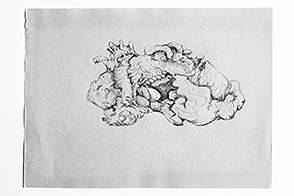 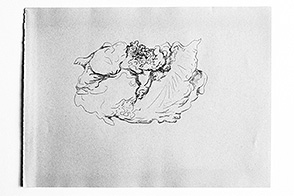 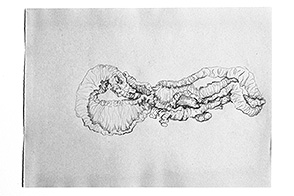 The drawings and texts appear to date from the 1950s to 1970s. The German-Russian doctor had set down his ideas in fragmentary notes, quota­tions from scien­tific publi­ca­tions, and sketches in pencil. The small bundle of papers conveys a patchy impression of an uncon­ven­tional image of the human. There are five pages of fragmentary texts and citations, which are like single bricks for a building that is not clearly defined. I have transcribed the handwritten notes. The drawings, which are all on bluish, rough paper, I used as a basis for the sculp­tured models.

Here are some of the citations and passages from science and other publications:

Only if one starts from the basic charac­te­ristic of our epoch, the transition of humankind from capitalism to socialism, can the signi­fi­cance of biology for the future of humankind be discussed in its correct context. — R. Löther, philo­sopher of science.

Life is a highly stable state of matter that, to generate survival responses, utilises infor­mation that is encoded by the states of the individual molecules. — A. A. Lyapunov, Sowjet­wis­sen­schaft, Gesell­schafts­wis­sen­schaft­liche Beiträge 6 1970.

Life, the mode of existence of an albuminous body, therefore consists primarily in the fact that every moment it is itself and at the same time something else; and this does not take place as the result of a process to which it is subjected from without, as is the way in which this can occur also in the case of inanimate bodies. On the contrary, life, the metabolism which takes place through nutrition and excretion, is a self-imple­menting process which is inherent in, native to, its bearer, albumen, without which the latter cannot exist. — F. Engels, Herr Eugen Dühring’s Revolution in Science, more commonly known as Engels’ Anti-Dühring, online

The progression of the evolution of life results from inner necessity, the concrete expression of which is the conflictual character of the perpe­tually trans­forming biotic relations. — J. M. Olenov, Einige Probleme der evolu­tio­nären Genetik und des Darwi­nismus, Moscow and Leningrad 1961 (in Russian), p. 148.

Some still cleave to the futile hope that all changes, which are observed in an organism during an experiment, are changes within a species. Rapha­no­brassica (a completely new plant created through artificial polyplo­idi­sation of two different genera to create a fertile tetra­ploid hybrid by G.D. Karpe­chenko 1928 — author’s note) is a new, hitherto unknown organism; namely, Rapha­no­brassica. — T. Dobzhansky, Evolution – Genetics – and Man, 1957.

The tempes­tuous develo­pment of science and technology renders the age-old problem of the relati­onship between humans and nature parti­cu­larly relevant today. The first socia­lists were already of the opinion that an important charac­te­ristic of the society of the future will be the conver­gence of humans with nature. — L. I. Brezhnev, 50 Jahre großer Siege des Sozia­lismus, Berlin 1967, p. 33.

The Hydra of ancient sagas was a beast that was probably invented after the image of the octopus, the polyp, or squid, animals that today zoolo­gists classify as being at the top of the phylum of molluscs, that is, relatively highly developed animals. Hercules, however, fought with a beast that was neither animal nor plant. Only something that was alive. Without a head or extre­mities, without a distinct form. Not gigantic like the Hydra of sagas in the sense of a singular, gigantic animal body. But gigantic in another sense, that extends beyond the Hydra. when one of its heads was cut off, the Hydra grew two others. The monster that I am referring to tears the warrior apart through a kind of repro­ductive act whereby billions of new beasts appear beneath his hands. — Wilhelm Bölsche, Vom Bazillus zum Affen­men­schen, Jena 1921, p. 3.

Lo, he goeth by me, and I see him not: he passeth on also, but I perceive him not. — Job, 9:11, quotation that J. W. von Goethe placed at the beginning of his Morpho­logie.

The individual should by no means be understood as something static, but as phasic. An individual as a totality is simply the cycle of the individual. — J. W. Harms, Indivi­du­al­zyklen als Grundlage für die Erfor­schung des biolo­gi­schen Geschehens, Berlin 1924, p. 3.

Prome­theus saw that all other animals had been wisely provided for; humans, however, were naked, unshod, uncovered, and without weapons, so he stole the ingenious wisdom of Hepha­estus and Athena as well as fire, and gave them to humankind (according to Protagoras and Plato — author’s note). How would it be if humankind were relieved of their burden and, without culture and technology, could lead a vegetative and animal existence?

As if thousands of weak-bodied and infirm poets, scien­tists, inventors, and reformers, together with other thousands of so-called »fools« and »weak-minded enthu­siasts«, were not the most precious weapons used by humanity in its struggle for existence by intel­lectual and moral arms, which Darwin himself empha­sised in those same chapters of Descent of Man. — P. Kropotkin, Mutual Aid: A Factor of Evolution, 1902.

Some transcrip­tions of his hand-written notes:

the parts lying under­neath contain much blood, the upper parts contain little blood / firm, mesh-like connective tissue holds the form together / the skin becomes pale in those places where the weight of the body rests on it / mucous membrane inter­fused with muscle tissue turned inside out / the skin is disco­loured greenish by bacteria. Sulfha­emo­globin is produced / organs suffused with gas bubbles / epithelial tissue covers the outer surfaces of the body / inorganic consti­tuents are stored in body tissue / formation of pressure pads of fatty tissue on the underside / lymphoid organs / loss of cartilage as well as intra­mem­branous bone forma­tions / formation as a curved tube / developed as villi / a mesentery / the origins of sack beings / evolu­tionary changes / partial humans / human sacks / taxonomic group: Homo tubero (swelling human) / evolu­tionary stage: from Homo erectus to vegetative primate / a result of the process of reducing to basic metabolic physio­lo­gical activity / the decisive turning point in anthro­po­ge­nesis with the singular develo­pment of the human imago / constant advance of plasma beings / re-organi­sation of the living human / knowing about the plasmic form of being, however, leads to a new aspect of the organ as organism / the plasmic mode of being does not persist merely in the simple existence of a slimy amoeba or as a discrete plasma entity. Under certain condi­tions the plasma with its core organs pushes forward to a new form of being, it performs this with an inner power and vehemence: the nuclei form shapes in a higher dimension. In an order that arises in various stages / that the second front of medicine … the form and its develo­pment / a new morphology is becoming visible today, which also sets up a new hierarchy of charac­te­ristics of life / the classi­fi­cation of plasmic predis­po­sition and mature form achieved … / juvenile stages / to review the develo­p­mental steps, which for example allow a heart to develop from the predis­po­sition for a heart / description of the genesis of a body / the destiny of humans is open and they are capable of many possi­bi­lities / a special case of anthro­po­ge­nesis / to separate out from a whole that stretches into infinity / to concen­trate our research interest on some specific circum­s­tance of humans / in this way a prevailing mood of the work comes into focus. From it grows the strength to create a new, to co-design / co-form the human, which appears to us to be a central intel­lectual task of the present / this appar­ently so simple, semi-trans­parent … / in optical emptiness (micro­scopic) / a real neofor­mation / very deviating variants / also the possi­bility of initiating such new forms … with which completely new designs arise / in bold forays to advance beyond what can be observed into what has not yet been seen / the ability to generate simplest life forms / the idea of plasma that compli­cates itself / uncon­scious life (instead of conscious life) interplay of folding and unfolding / emphasis on the inner organs — predis­po­si­tions for novel organs / contrac­tions (muscular contrac­tions), neural excitation, sensory abilities, glandular function, sexual appearance, events / the principal anato­mical develo­p­mental tendencies, which are recognisable, affect the reduction of the head and the extre­mities and thus the associated loss of bipedal or quadru­pedal locomotion and the surrender of manual abilities. … further, a regression of the brain … the leap from the vertebrae to the inver­te­brates / among the changes that the impor­tance of biolo­gical research has wrought in thinking in general and that also seriously influence the concept of a human, the devaluation of consciousness is not the smallest / … to establish empha­ti­cally the insight that the extent of conscious experience in the spatial and temporal range of earthly fullness of life is negli­gible, almost like a dot, that this consciousness only occurs like exiles on tiny islands in an ocean of life which works and toils uncon­sciously / insights in the complex control of all life processes, which are performed by the discon­certing, for humans incom­pre­hen­sible power of plasma / the powerful wave action of vegetative existence / life on the way to itself / a form of inter­me­diate life / body parts that assert their indepen­dence / that which came together to form a human being, now goes its separate ways / … Humans, in the way that they are, cause too much harm and the … / and see how other ways are possible. / Substance and accident (idea of something). It is or it is not, tertium non datum. all the dualisms. But here something between disem­bedded interior and exterior. / What habitat do these sack-creatures need? Nutrient solution, soup, ocean, air? / Oneness of inorganic and living nature / individual develo­pment and regene­ration / living, self-sustaining systems on a human basis / the individual human-like clusters are combined in an organo-coenosis / death is the temporal end of an individual. In humans, death is the trans­for­mation into a corpse / natural death is by itself through division of propa­gating protozoa identical to repro­duction and therefore death without a corpse. This unity of death and repro­duction should also be made possible for humans.